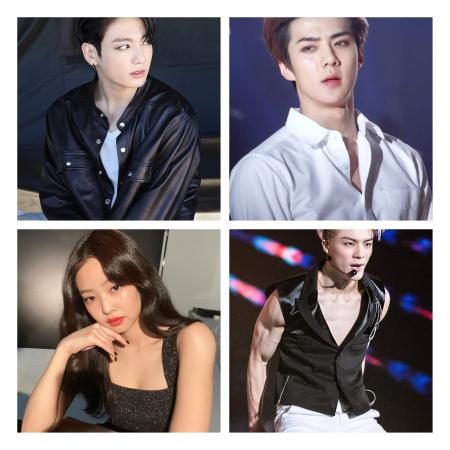 Are you searching for the Most Famous K-pop Idols? Cheers, you are at the right place.

As a music fan, you’ll agree that Korean pop music and stars are now dominating everywhere on the internet. The innovative music format and efficiency of performers from several successful K-pop groups are key components to their international success. And who is the most successful and popular K-pop idol has become a contentious question amongst followers, which is why you’re also right here.

But there are few K-pop Idols whom audiences consider the Most Famous K-pop Idols in the world. People consider the singers as the heart of the kpop songs in the K-pop industry that’s why they are popular & Successful among audiences.

Who are the Most Famous K-pop Idols?

Let’s get started to know the Most Popular K-pop Idols in 2022 With photos and some short introductions to them.

Since joining BTS in 2013, the young guy has gained popularity among the youth and is recognized for uplifting the audience during performances with his raps and dancing routines.

Jungkook is incredibly gifted, which is why, despite his young age, he has garnered a large fan base and recognition not only in South Korea but also in other Asian nations. And, of course, the majority of his songs and videos have become tremendous hits.

Jungkook has a magnetic personality in addition to being a brilliant singer, rapper, and dancer. His appealing appearance has also aided his career. This is why he is considered one of the Most Famous K-pop Idols In 2022.

Lisa Manoban is a rapper and dancer from Thailand. She is a member of ‘BlackPink,’ a South Korean girl band. At the age of 14, she won the ‘YG Entertainment auditions in Thailand and migrated to South Korea.

She worked for the firm for five years before making her debut with the female band ‘BlackPink,’ who published their first album, ‘Square One.’ She is the group’s newest member and has established herself as the group’s primary rapper, vocalist, and dancer.

She speaks Thai, Korean, Japanese, and English fluently and enjoys western food and culture. She does, however, frequently remark about missing her parents and authentic Thai food. In 2022 she is the Most Famous K-pop Idols.

Kim Taehyung, often known as ‘V,’ is a South Korean singer, composer, and dancer. He is best known now as one of the key members of the famed K-pop group Bangtan Boys (simply known as BTS). V, or Tae as he is more often known, has a large fan base both in South Korea and worldwide. This hip-hop singer is well-known for his boyish charms as well as his strong voice.

He is in charge of writing and producing the band’s smash singles, ‘2 Cool 4 Skool’ and ‘Boy in Luv.’ His career began in the South Korean music business, and he quickly rose to worldwide prominence, marking yet another K-pop milestone for the country.

BTS has a massive fan base both online and offline, with over five million followers on their Twitter profile as of 2017. His fan base is mostly made up of girls who like his adorable appearance and engaging personality!  As per his back-to-back super hits, he is now considered of the Most Famous K-pop Idols.

Ji Soo is a South Korean actor and model who has been in several films and television shows since his debut in 2007 with the short film ‘Beastie Boys.’ Ji, who was acting and martial arts aficionado as a child, began acting in high school and college with theatre and has been in various short films.

And as he became increasingly well-known for his commanding on-screen presence and excellent looks, he began to get more television jobs. His initial claim to fame came in 2015 with the successful TV program ‘Angry Mom,’ which placed him on the map and made him a household figure.

Know More About- Most Beautiful Girl In The World

Several parts in dramas followed, and fans admired his diverse acting abilities in TV series such as ‘Page Turner,’ ‘Cheer Up,’ and ‘Moon Lovers,’ as well as films such as ‘Seoul Mates’ and ‘One Way Trip.’ Aside from that, his enthusiasm for acting led him to the web series platform with ‘The Lunchbox’ in 2015, and he then became a member of various variety shows on Korean television, including ‘I Live Alone’ and ‘Showbiz Korea.’

Kim Jun-myeon, a South Korean singer, model, and actor, goes by the stage name Suho. Suho is a Korean word that means “Guardian.” He is also known as “Sunnouncer” (Suho+Announcer), “Esuhort” (Suho+Escort), “Leader,” and “Jun Ma Hao.” He is a member and main vocalist of the South Korean-Chinese boy band EXO-K, which is located in Seoul.

He had a tremendous desire of being renowned as a singer since he was in elementary school, and his wish came true when a casting director noticed him. From then, a magnificent path to success began, and he quickly became one of the most well-known faces in the South Korean entertainment world.

Know More About- Most Handsome Man In The World

Park Ji-min, better known as Jamie Park or Jimin Park, is a South Korean singer, composer, and television host. She is most known for her role in the female duet 15& and as the Season 1 winner of the reality singing competition ‘K-pop Star.’ Her hit songs include renditions of ‘Rolling in the Deep’ and ‘Over the Rainbow.’

Aside from being a pop singer, the young girl is also a television presenter, having been in series such as ‘After School Club,’ ‘Strong Heart,’ and ‘Night Line,’ to mention a few. She has also been on various radio shows. Park Ji-min is a down-to-earth demeanor in real life, despite his early success. If you imagine the Most Famous K-pop Idols In 2022 Jimin will be there automatically.

Jennie Kim is a South Korean pop singer who is also a part of the female K-pop group ‘Black Pink.’ Kim was signed as a trainee by ‘YG Entertainment’ after finishing her studies in New Zealand and traveling to Seoul, South Korea. She became famous after participating in G-music Dragon’s video ‘That XX.’

She was subsequently included in his hit ‘Black.’ ‘YG Entertainment’ has been pushing the launch of ‘Black Pink’ for a long time, and Jennie eventually made her debut as part of the band on August 8, 2016, alongside Lisa, Jisoo, and Rosé.

Jennie has also worked with Lee Hi on his song ‘Special,’ Seungri on ‘GG Be,’ and G Dragon on ‘Eventually.’She, like the other members of the band, has a large fan following and is frequently seen as the leader of ‘Black Pink.’ Jennie Kim’s label, YG Entertainment, regards her as their trump card, and she is frequently referred to as “the YG Princess.” She is a top-rated K-pop singer who speaks Japanese, Spanish, English, and Korean. She is among the Most Popular & Successful K-pop Idols In 2022.

He was born in the South Korean city of Incheon. Jeno has a sibling who is older than her. Seoul School of Performing Arts is where he received his education. He was a model as a youngster and appeared in several commercials. He is NCT Dream’s Lead Dancer, Lead Rapper, and Sub Vocalist (Source: Melon, Grazia photoshoot 2017).

He began as a vocalist but evolved into a rapper over time. The song “Dear Dream” is his first time contributing lyrics to NCT Dream. After the mini-album “We Boom,” he established himself as a full-fledged songwriter for the band.

Kim Hyun-Joong is a well-known actor and singer from South Korea. He is well-known for being the lead and major rapper of the South Korean boyband SS501. His plays include ‘Playful Kiss’ and ‘Boys Over Flowers.’ Kim is well-known in Korea and is regarded as a fashion icon. His Japan tour was a huge success, and he gained a lot of recognition as a result.

Despite being involved in multiple legal squabbles, his celebrity has not suffered, and his supporters continue to adore him. Among his notable albums are ‘Unlimited,’ ‘Heat,’ ‘Tonight,’ ‘Round 3’, and ‘Imademo.’

He has been on television series such as ‘Inspiring Generation,’ ‘Can Love Be Refilled,’ and ‘Nonstop 5’.He has also starred in series like ‘Happy Together 3’, ‘K-Pop Star Conquering The World,’ ‘We Got Married,’ and many more. He provided the voice of a character in the film ‘Shark Bait / Pi Story.’ Without any doubt, he is the most successful & Famous K-pop Idols In 2022.

Ji-Eun is a singer and television actress from South Korea. She is one of three current members of the all-girl group ‘Secret,’ better known by her mononym Jieun. Her passion for music began at a young age, which led to a successful audition for JYP Entertainment. Song was supposed to be a part of the agency’s own K-pop group, but the idea was scrapped, and she left JYP for TS Entertainment.

She blossomed with her new talent agency and was included as the lead vocalist when ‘Secret’ was founded in 2009. While the trio did not have much success at first, all changed in 2010 with the release of the chart-topping songs ‘Magic’ and ‘Madonna.’The members of the group gradually carved out a “girl next door” image in the Korean entertainment business.

They’ve released two studio albums, toured Japan and Singapore, and received several prizes. Jieun is also a solo artist, having recorded many songs and singing for popular drama OSTs. She was nominated for a Seoul Music Award in the Bonsang category in 2015 for her debut Extended Play (EP), ’25.’

1. Who is the most successful kpop idol?

2. Who is the most popular kpop idol?

Many media have also named V the most popular idol for the year 2022. For the second year in a row, pop culture entertainment site Otakusmart has named V the most renowned K-pop idol in the world. Google searches, Instagram followers, Guinness World Records, and other factors were used to determine their position.

We Biographyzing hope that you liked what we served about “Top 10 Successful & Most Famous K-pop Idols In 2022” So kindly share this with your friends and comment down below if any information is wrong or missing.